We all know this dream. You raise yourself on tiptoes, spread your arms like wings, pump air into lungs and… one step, another… you leave the ground. Hardly and slow at first, but after all you gain height and the further you are from earth the more confident your movements are, your breath is more smooth and light. And then the incredible feeling of joy and and happiness come on you because you can do everything and all your dreams will now come true. And now earth is far underneath you with its worries of previous day. Problems that seem so big and unsolvable on earth are so insignificant here from the bird’s eye view. We see dreams like that more often in a childhood and in youth, but..unfortunately… much more rare at a mature age. But anyway we, adults, recall those dreams till oldness as the most joyful and happy thing that have ever happened to us. And we dream that one day we will raise on tiptoes, spread our arms like wings and…
That’s why when we started to think about the interior theme of our restaurant located in Central Children’s Store we have reached common ground. Children’s store is a place where adults who bring here their kids become kids themselves for a while. And which idea connects people from baby to adult? Of course the flight dreams in sleep or in reality. It’s definitely the first place in the rating list. And certainly on something magic, joyful and unusual. What can be more mysterious and unusual than ballons, dirigibles and even… “flying ships”, “flying houses” and whole “flying cities”!!! Well, now we invite you to the fascinating journey through the fabulous park of dreams, rest and delicious food. Fly with us!!!
So, another “Grabli” restaurant of same-name restaurant network completely differs by its interior design but doesn’t differ at all by its technology and organising of clients service from other network projects.

When it comes to architectural planning solution, the restaurant is divided into two large rooms located at 6th and 7th floors of Central Children’s Store that are united by wide main staircase at the centre of room. At the first level of the restaurant we will find big dining-hall, passing through which we will find “free-flow” open kitchen zone that is traditional for “Grabli”. The guests will be able to freely move in it between the islands of cold and hot dishes, desserts, drinks and salad-bars. A nonsense for a “free-flow” zone will be an appearance of large separate island where on one side in the presence of visitors they will cook hot and hot different kinds of pizzas and on the other side the sushist at your desire will cook for you different kinds of suschi and rolls. So now culinary geography of the “Grabli” will be more various and attractive for visitors. As for the rest, this zone will always please visitors with its variety of dishes, ranging from cold collations and drinks, soups and hot dishes to dainty desserts, bakings and fresh juices. After we make a big circle around the issue hall and eat all “tongue breakers”, we get through cash-block into large dining hall with floor space of 493 square meters for 242 persons. There you will see some different by theme and interior design zones with cosy and comfortable sofas, where you will rest after long walk through the mall. At the centre of dining hall in front of cash desks there is a staircase to the second level of the restaurant. Near the cash desks and the staircase — is a big counter with wide range of drinks and ‘’sweet’’ confectionery displays. You won’t know where to look first, because there are the most delicious and beautiful branded pastries, cakes made according to special recipes of “Grabli” restaurants chain pastry chef. Over the bar you will feel the smell of freshly brewed coffee. Who will resist such temptation? You can use bar without entering the open kitchen zone, right from the dining hall. It will attract those who is not that hungry and just came “for a cup of coffee” or those who will want to take additional dessert after finishing the meal.
For those who prefer more space there is another dining hall at the second level of the restaurant. Its floor space is about 200 square meters and it has room for 116 visitors. It has its own independent bar with any kinds of drinks and confectionaries. You’ll find there even an ice cream. You will also see a bathroom in that hall. In summer season you can go to the open area of the summer coffee-shop from the second level of the restaurant. It’s decorated with flowers and connected to viewing point of the Central Children’s Store, from which you can see spectacular views of historical part of Moscow and the Kremlin. 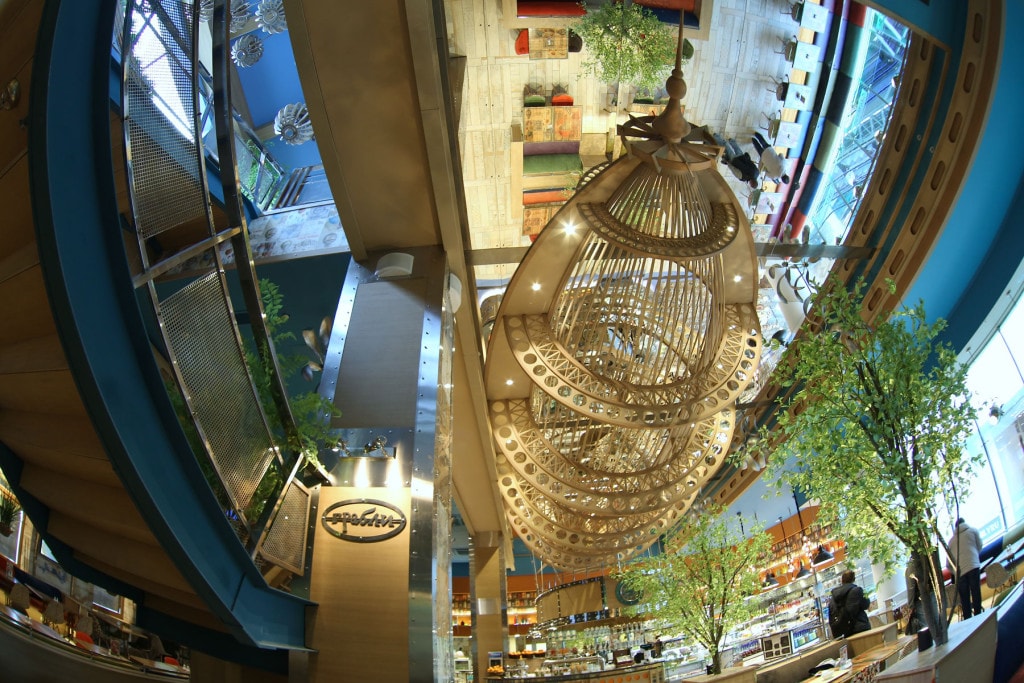 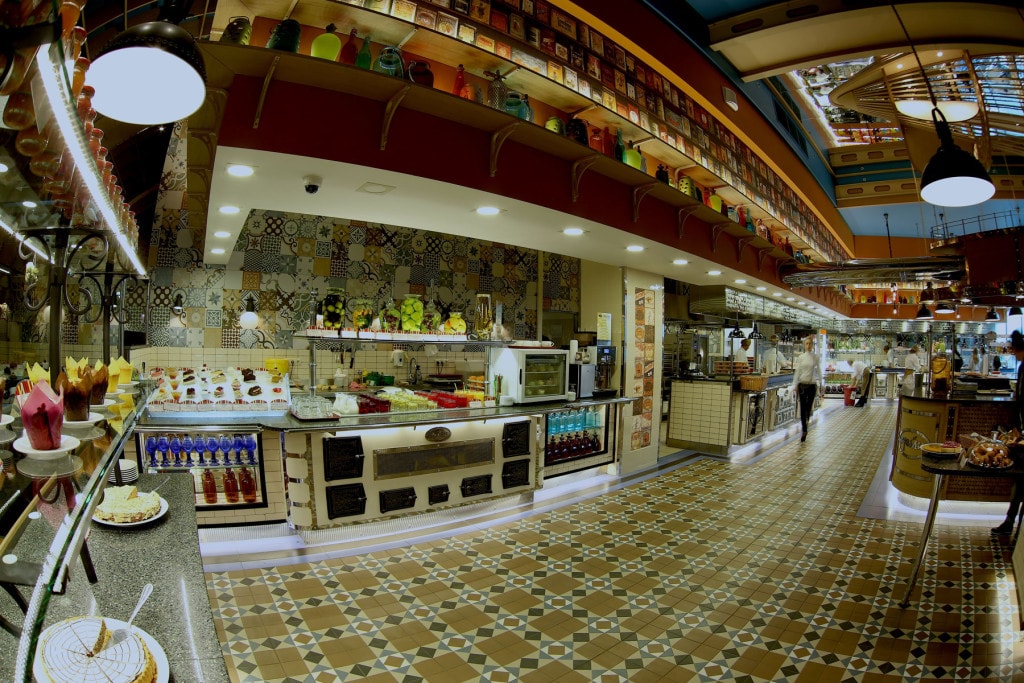 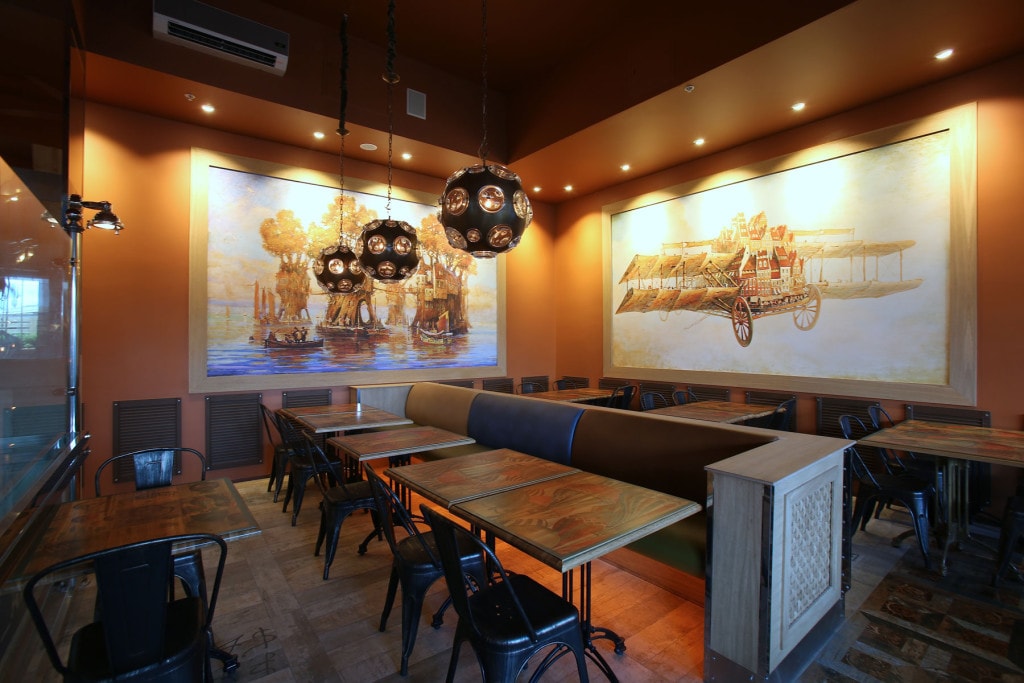 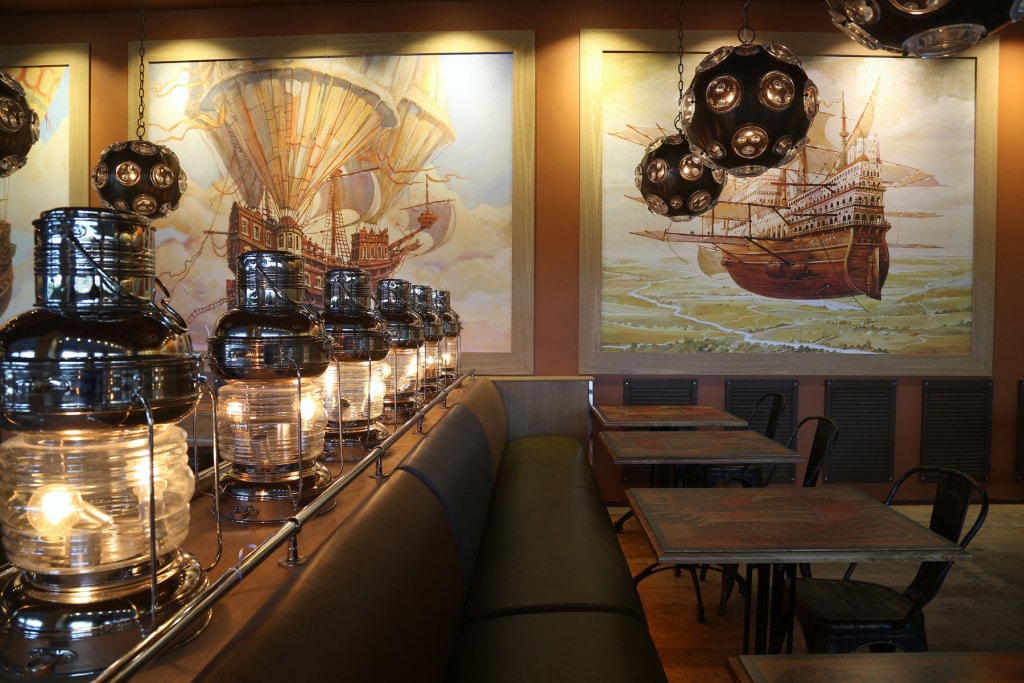 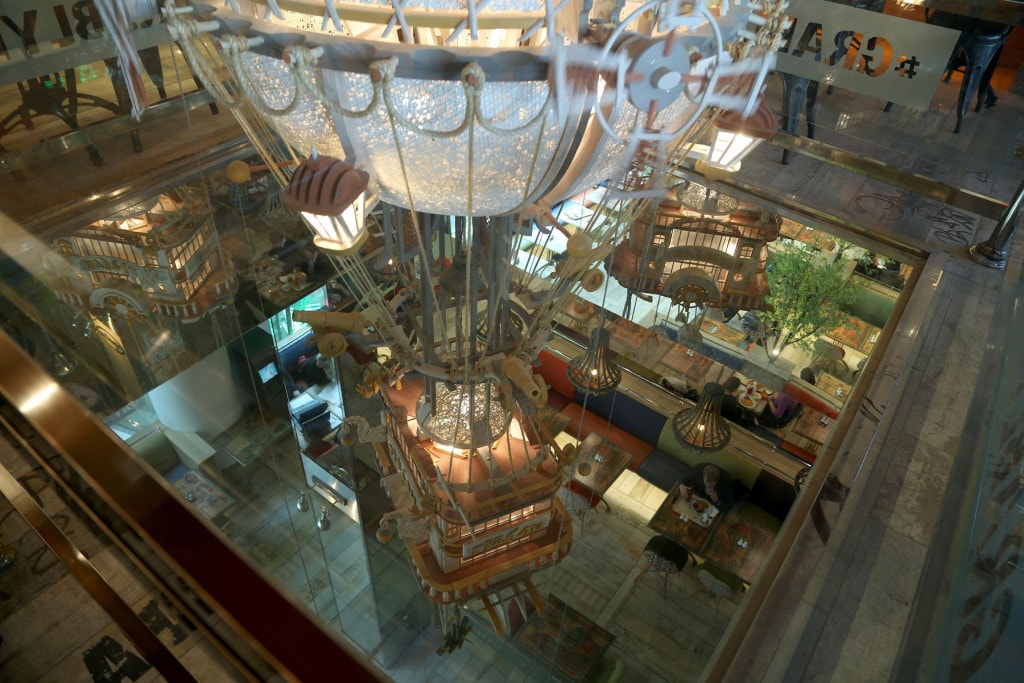 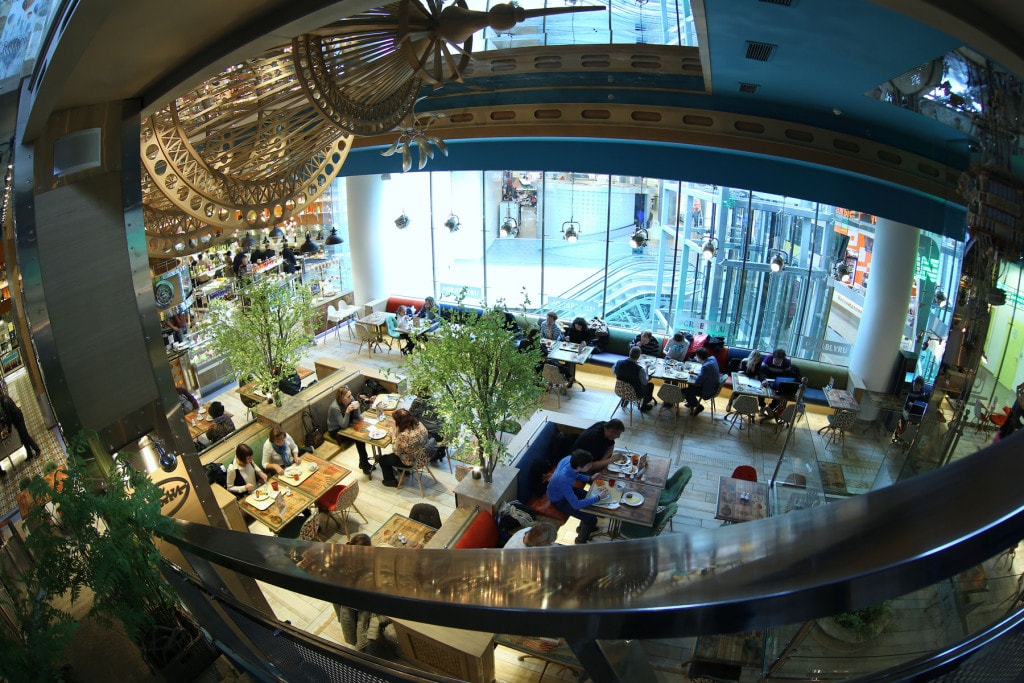 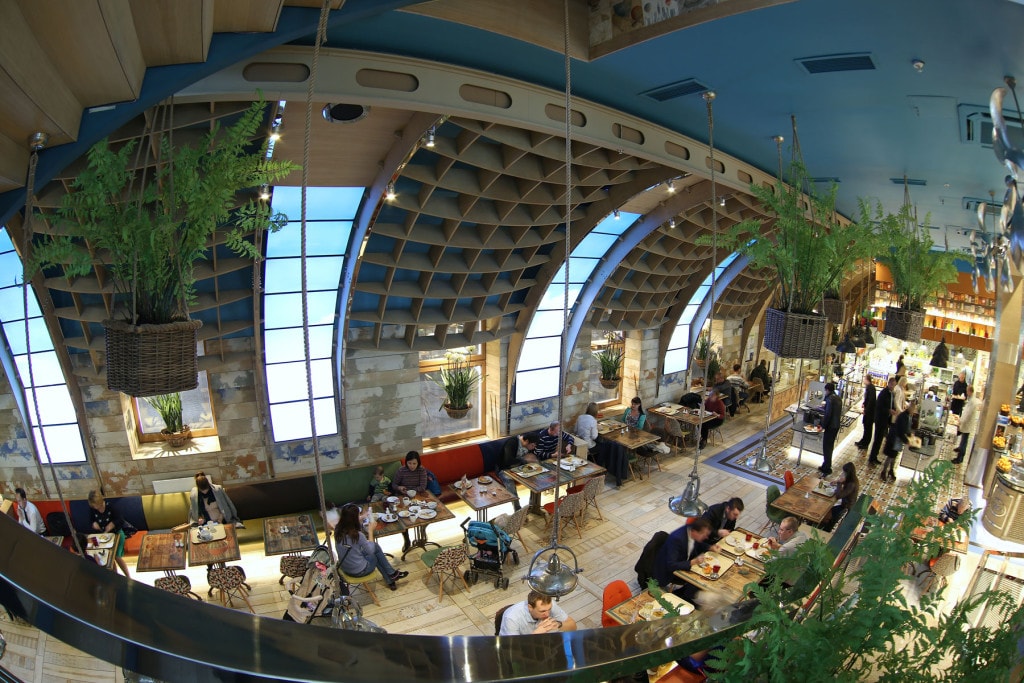 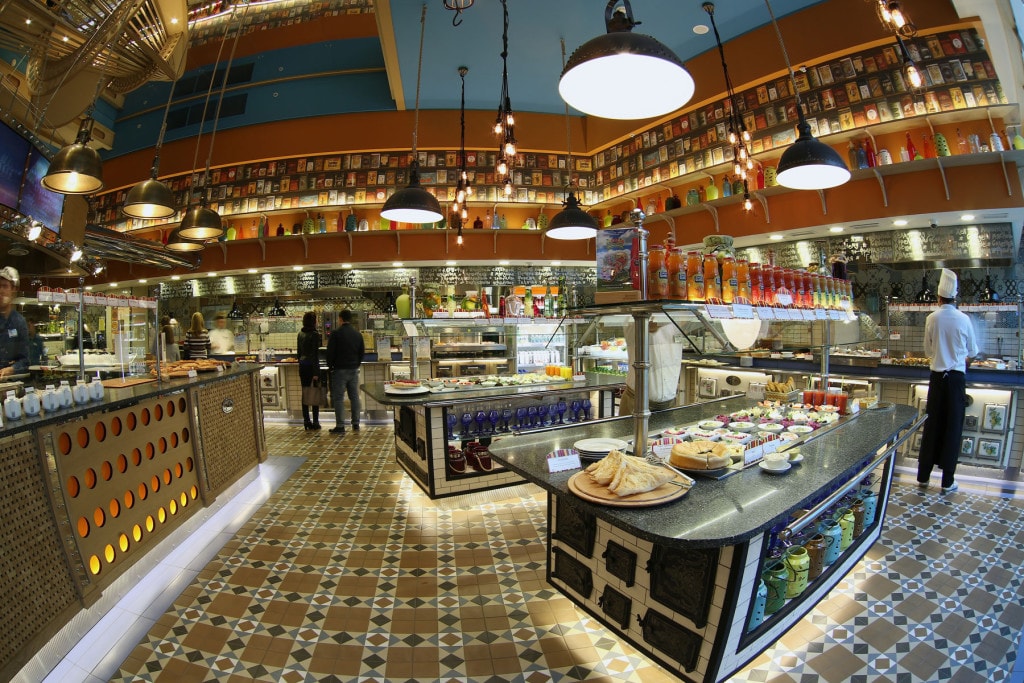 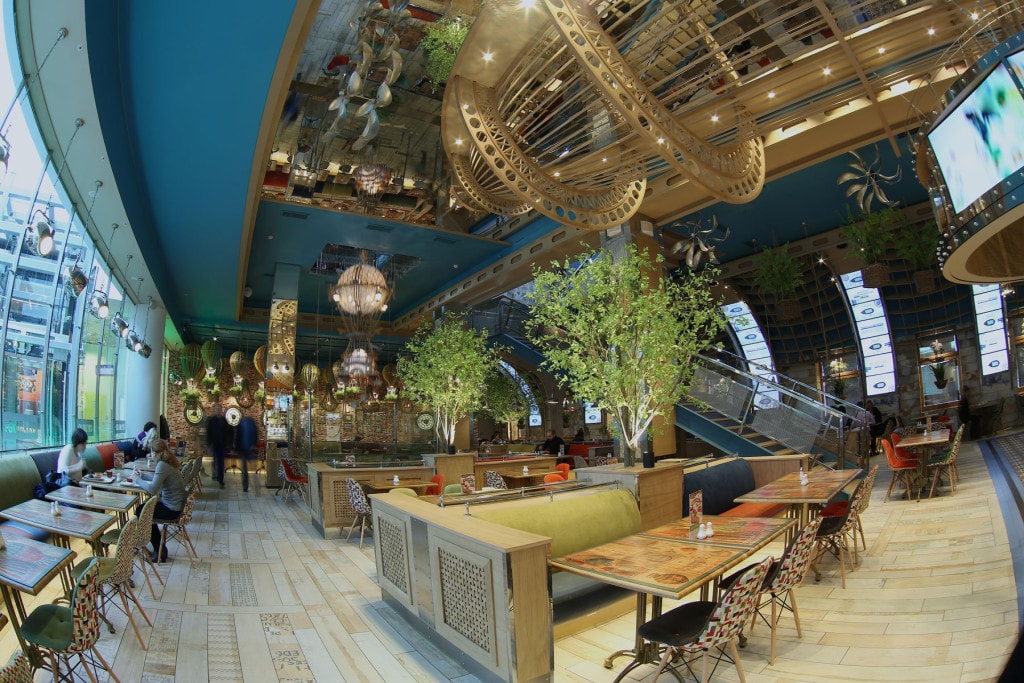 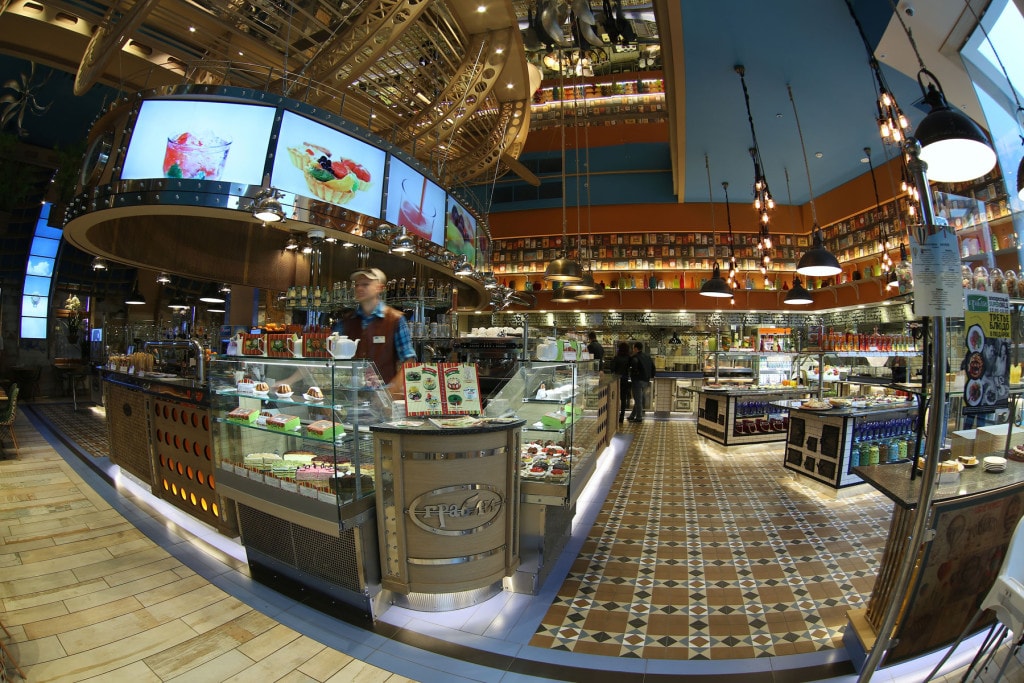 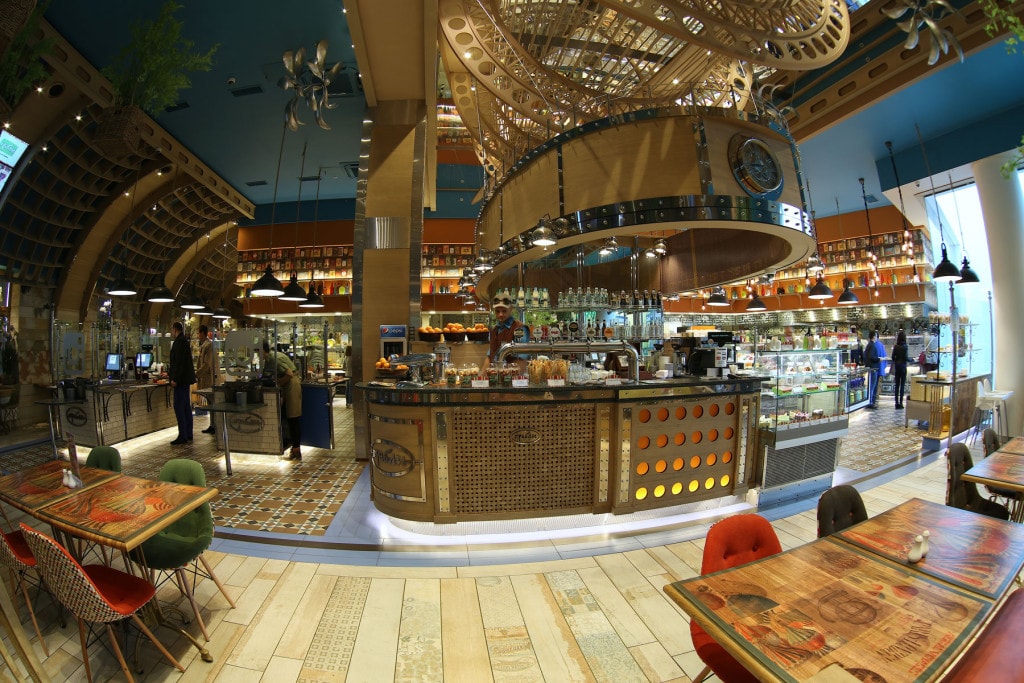 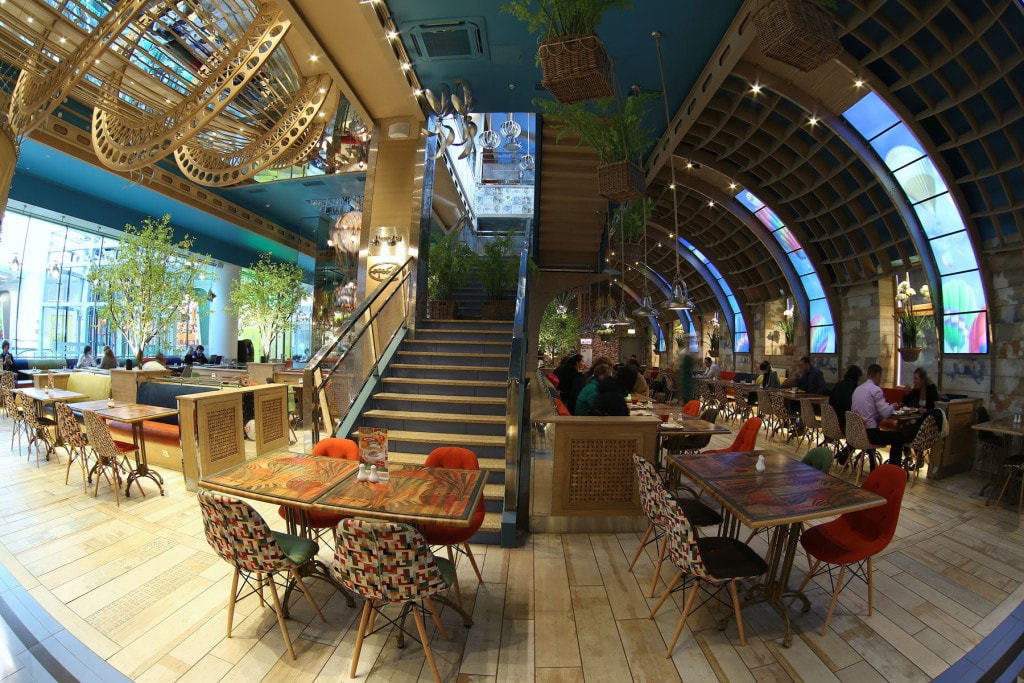 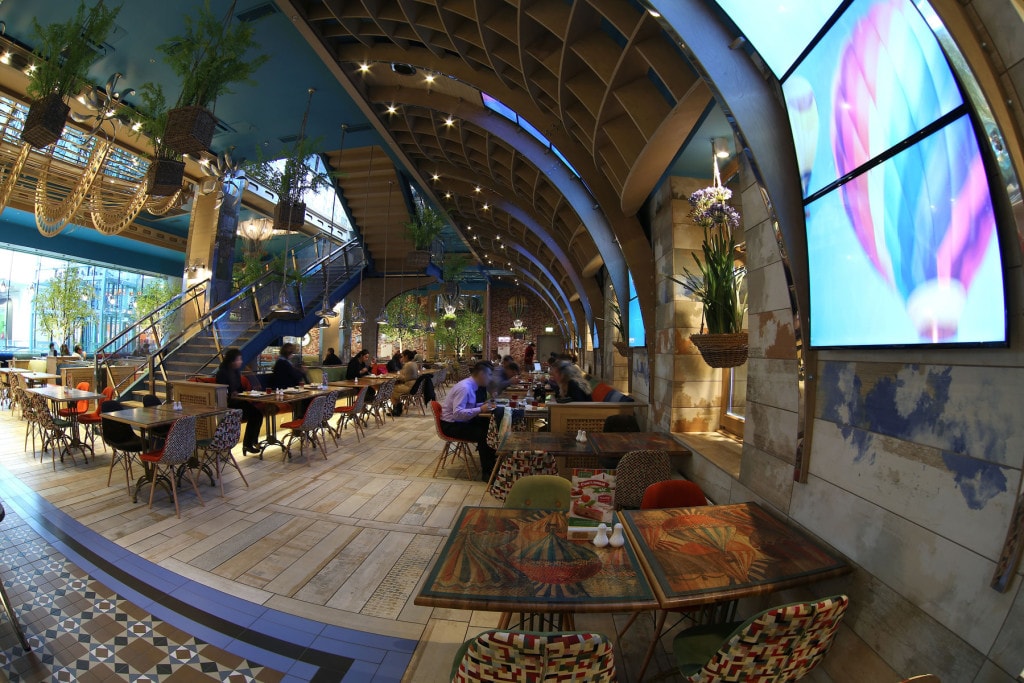 Artistic and decorative solution of the interior

As for interior and artistic solution of the restaurant, we have already mentioned that the project will be devoted to aerostatics in all of its aspects. Let’s start from the first level of the restaurant.
The dining hall is divided into several zones, each of them has decorative dominant idea. Model of a large dirigible definitely will be one of them. It will be made in 3D puzzle style and will be 13 meters long. The dirigible will be above central island and bar. It will look like they are hung on it and are always in the air. The dirigible is hung along inner glass foreside of the restaurant in such a way that people on escalators and in elevators will see an incredible panorama of the “Grabli” dining hall with large flying machine hovering under the ceiling. The dirigible is illuminated by decorative interior metal lamps in Jules Verne style.
There is another not less interesting object d’art between entry zone and bar that can be looked at for a long time it’s really in constant motion. That fabulous air balloon is continuation of general conception of the restaurant and it’s a successful implementation of common idea of Alyona Tabakova, project architect, and of Anatoly Titov, artist. The air balloon with help of special mechanisms so to speak “goes sky high” from the first level of the restaurant to the second and then smoothly comes back on the “earth”. We have organised some sofa groups around that attraction, so it will be comfy and pleasant to observe that view from there. Glass prism with the ballon is located near the entering zone where we will see the whole parade of balloons with flower cache-pots, lamps and toy planes among them. Generally speaking, it’ll be a real fairy show and festival.
Facade wall of the restaurant will be the background area with incredible, fascinating view of central square of Moscow, fabulous perspective on Polytechnic museum and on high-rise building on Kotelnicheskaya Embankment from a bird’s eye view. By the way, the fortunate position of the restaurant has also played its role in the choosing of the theme. When you are under the roof of such grand building you really feel like you are flying over the square, because the major part of the view is the sky which itself, like an artist, creates constantly changing pictures, being an active participant of the interior design process. “Videowall” consisting of 42 monitors, located between the windows, also helps to create an illusion of movement. The monitors, just like the windows, show us constant change of weather, times of the day and seasons. And all that is a background for the balloons parade. But, we will not unlock all the secrets, we will just say that the first level of the restaurant is all “in motion” as far as the eye can reach.
But the second level is for those who want to rest from fuss and to enjoy view and quiet. It really has a lot of things to look at — all walls are decorated with the pictures by famous artist Andrey Vereschagin. Practically, you can say that it’s a coffee shop in a “picture gallery”. And all the pictures are unusual, fantasy — there are “flying ships” and houses built on the air plane and cities on the trees. A lot of things to look at. And in summertime you can also visit summer terrace in the open air. So chose whatever you like.
When it comes to colour and light conception of the restaurant, we tried to make the interior as lighter as possible, “airy” and at the same time joyful, colorful and cheerful. Balloons that differ by colours and pictures on them “soar up” into the sky against the background of the “clear blue sky”, the walls are decorated with woods and have clouds painted right on them. At the bottom there are sofas between the trees faced with natural oak. The interior is full of “sun and summer”, just like we see the world in dreams or in childhood. That idea of warmth, sun and of park unites the restaurant on Lubyanka with all other restaurants of the chain. And just like is seems to us, it will always cheer people up and will distract them from all problems and worries!!! Have a cheerful mind and bon appetit!